I’m having a panic attack.

Breathing and walking around the house chanting calming phrases aren’t helping, so I’m going to do the only other thing that helps.

By body is pulsing. You know those deep sea creatures that shine with bioluminescence? They flush green and yellow, the color rippling across their skin as they move through the water…

That’s what this feels like. I think it’s probably my blood pressure. The feeling of fluid straining against veins and arteries as my vision narrows into a tight knife-sharp tunnel, daggers tearing at my skin.

It makes my teeth hurt, of all things. My molars — all of which are impacted (thanks genetics!) — pound away in my head, a not-so-subtle reminder. “Hey there. Don’t forget you have to take care of us sometime. It’s only going to cost a few thousand and lay you up for a week because you heal slowly. Good talk.”

My fingers get cold and clumsy. I’m typing like a child dialing a fake phone to call their imaginary friend.

My heart hurts. It’s not a heart attack (better not be), but my chest hurts. I can’t quite feel my heart beating, but I can’t not feel it, either. It’s an aching crawl of tension across my chest and up my neck. Like I lifted something too heavy and threw something out.

My breathing is getting under control and this thing is passing.

It took 10 minutes from beginning to end.

It’s been a couple months since my last panic attack, but, in hindsight, I can’t say this one is unexpected. There’ve been a lot of stressors kicking around the past month.

Honestly, I’ve been surprised I kept it together so far.

Well, since you’re here, let’s end with a little “lesson” of sorts so I feel like this was a good idea to share.

There have been times over the years where a panic attack has tied into a sudden ring of negative self-talk (“Idiot!”, “You should’ve done X!”, “If only you were smarter/better/x-er!”, etc.).

Negative self-talk is dangerous, especially if you’re depressed or stuck in an anxiety loop. When you tear yourself down, it’s easy to keep layering it on and destroying your own self-worth until you get to a point where the eternity that is your in-process panic attack will only end if you end it.

So, what do you do? You start with some basic neuro-linguistic programming… meaning, you change the phrasing of your personal takedowns.

These are small changes to the way you think, which lessen the impact phrases have on your self-worth. You don’t want to stop being self-reflective, but, at the same time, you don’t need to convince yourself you’re an absolute piece of shit all the time, either.

Pro Tip: Practice these when you feel fine. Don’t wait for an attack to strike and then try changing the way you self-reference. It won’t work. Do it while you’re well and it’ll come naturally.

Ultimately, one of the worst people to be around when you’re in a panic attack or having a depression episode is yourself, so the best thing you can do is trick yourself into not being such a jerk when you’re vulnerable. 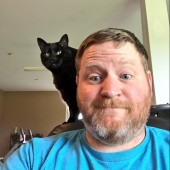 This site uses Akismet to reduce spam. Learn how your comment data is processed.

You have Successfully Subscribed!